January 2016 Herd classification news:-
Thurlstone Jerseys enjoyed a successful classification visit on Friday 29th January with 16 new EX ,6 multi EX and 31 VG (four of which were heifers) and another 23 heifers GP with only 4 G and one F.
Highlights were Danish Impuls Eva looking amazing at twelve years in her eleventh lactation scoring EX94 with 97 pts legs and feet and a 93pts mammary. 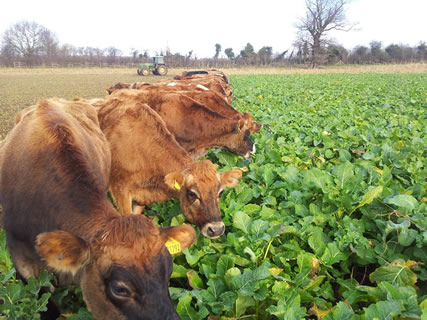 Spring calved heifers eating kale at Thurlstone
These heifers have been milked once a day since Christmas Eve and will be dried off at the end of January.
They are still living outdoors as the Autumn calvers
claim the cubicle space available.
In January and August 2012
44 fresh cows and 56 heifers were classified, adding another 14 Excellent cows including;
an EX93 3rd Calver by Q Zic and 10 VG heifers.

Our show calf from 2010 Thurlstone Abe Calendula classified VG87 2 yr, she has now calved in with her second calf and is still looking very promising.
As we enter 2012 the herd has just been classified for the first time, so far we have scored 82 animals, and will spend a 2nd day scoring mainly the heifers and younger milking animals.

The highest scored cows in the herd are
Abbotsley Sambos Bianca EX93-2E who has a 6th lact of over 7000kg
Thurlstone Julian Calendula EX92 who is giving over 25kg/day in her 4th lactation
Thurlstone Abe Calendula pictured below was Inter Breed Champion Maiden Heifer Yorkshire show 2010 and 3rd place October born Calf at All Breeds Calf Show 2010
We have just returned from a week at the Yorkshire Show where Anna took three animals to represent the herd, Thurlstone Julain Calendula 2 was in the prizes with a 3rd place rosette in the Junior Cow in Milk while Thurlstone Abe Calendula a October 2009 calf sired by Ahlem Lemvig Abe was Interbreed Maiden Heifer Champion on the Wednesday. 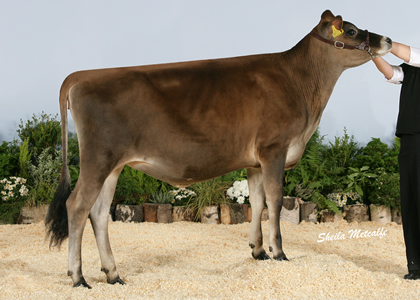 Several cow families are developing now at Thurlstone with offspring showing promise. They include Mouldy, a Danish import cow now in her 4th lact who won 2nd prize in the North East Jersey Club production competition with yields of 7453 litres at 6.85 fat 4.56 pt. 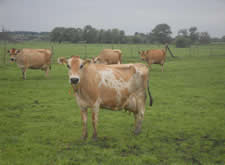 
She has a milking daughter by Danish bull Brix milking well in her second lact after a first of 5451 litres at 5.86 fat 4.13 pt 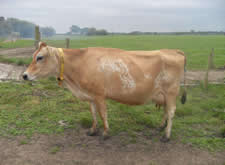 Thurlstone Brix Mouldy
Impuls Tidy 2nd lact was 6932 litres 6.81 fat 4.71 pt and she has a stylish daughter by Big Show in calf to sexed On Time for the autumn 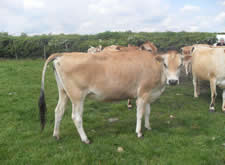 Arup Burgandy, a 4th lactation cow by a DJ Hot son, has a daughter by Comerica, again a nice looker, in calf for autumn to sexed  On Time 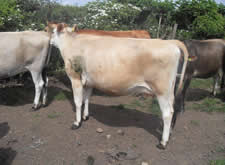 Of the 160 Danish heifers that were purchased, production and performance has been very good. Some are just now starting their 4th lactation, having gained 3 months so far since they arrived in October 2006. Some are making very attractive individuals.

The most popular sires are JAS Artist, Q Zik and by far the best with 26 head Q Impuls.

Of the English bred cattle, Imperial Saturn and Vallystream Julian have both produced sound, attractive stock with the will to live and work.
We hope to feature different prominent families in Herd news, and we start with the Seamaiden family which originated with a cow bought from the Osberton herd and is proving to be profitable through high production and easy management:-

Thurlsone Excaliber Seamaiden GP81- has completed five lactations, with a 5th lactation of 6471kg at 6.25% fat and 4.42% protein. She first calved at 2 years 2 months and has gained 2 months over her 6 calvings. She has also bred three good daughters. She calved her 6th a Julian heifer (see below) on 5th September.

Thurlstone Pavaroti Seamaiden is her eldest daughter by Thurlstone Pavaroti, she has three completed lactations and gave 6502 kg at 5.2% fat and 4.31% protein in her third. She is now dry due with her 4th to DJ May on 27th October.

Thurlstone Connection Seamaiden is her other milking daughter, she is in her third lactation now after a 2nd lactation of 5836 kg at 5.75% fat and 4.35% protein. She has bred two daughters as well. She calved on 28th June and is giving over 20kg/day.

Thurlstone Julian Seamaiden by Valleystream Julian is the youngest daughter of Exaliber Seamaiden, born when she calved her 6th in early September. 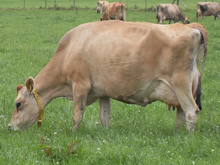 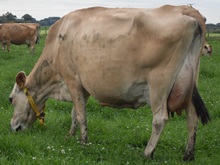 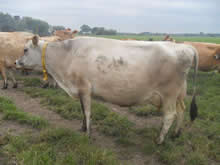